Not what comes to mind when working from home…  A study from New Zealand found that sitting upright, as compared to sitting in a slumped position, will make you feel more proud after a success, increase your persistence at an unsolvable task, and make you feel more confident in your thoughts.

Heck, we all know what an office chair and proper posture at the computer looks like. Do we actually sit in that position when we are at home? I will be the first to admit, I don’t often. For example, I started this article on my laptop on the couch trying to stretch forward to the coffee table. After that familiar neck strain and shoulder pain soon afterwards (along with researching the connection between posture and mood) I realized I had to move to a proper* workstation. 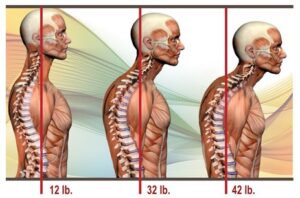 First, an important point that needs to be made, the normal weight of your head is 12 lbs but with the leverage of anterior position while we slouch forward is 42 lbs! This happens with looking at your phone, or sitting on the couch trying to type a project on the laptop. All this load will fatigue the important muscles for posture affecting the function and strength of these tissues. 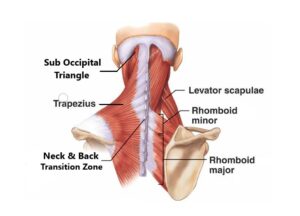 A quick anatomy review, we can talk about the muscles that are connected to the upper back and neck that influence posture. Starting from the top, the Sub-occipitals are the smallest but have the most influence over the angle of the head position, connecting from the skull to the first two vertebrae. There are three of them and they create a triangle around a small nerve called the greater occipital nerve. These little nubs can refer pain or headache into the temple region, above or behind the eye.

Second is the Levator Scapulae and Trapezius muscles groups. Large accessory shoulder lifting muscles and head extension + rotation muscles they will quickly become over activated and tight if you lean your head forward. Though they are strong and have endurance, they cannot sustain the 60lb head position for more than a few minutes without shortening to protect.

A third important muscle included in this group is the Pectoralis (major and minor) muscles, the chest muscles. These, like the upper trapezius, will get over activated and tight pulling your shoulders forward, causing you to jut your chin and lean forward.

The last muscle group on this image is the Rhomboids (major and minor) and then stabilize the shoulder blade to the spine and help with keeping your back upright. They will get over stretched and become inhibited (weak)

The research in New Zealand found that sitting upright can make you feel more alert and enthusiastic, feel less fearful, and have higher self-esteem after a stressful task. The study went deeper than that, it found sitting in “proper posture” had benefits for people with mild to moderate depression, “including more energy, less negative mood, and less self-focused” – changes consistent with easing of depressive symptoms.

I have put together a group of stretches on Upper Crossed Syndrome, the diagnosis of poor neck posture, and some other explanations and solutions to the problem.  If you can avoid slouching on the couch or at the modified workstation (like the kitchen table) you will have long term benefits not just with the muscle and joint health but with mood and energy.