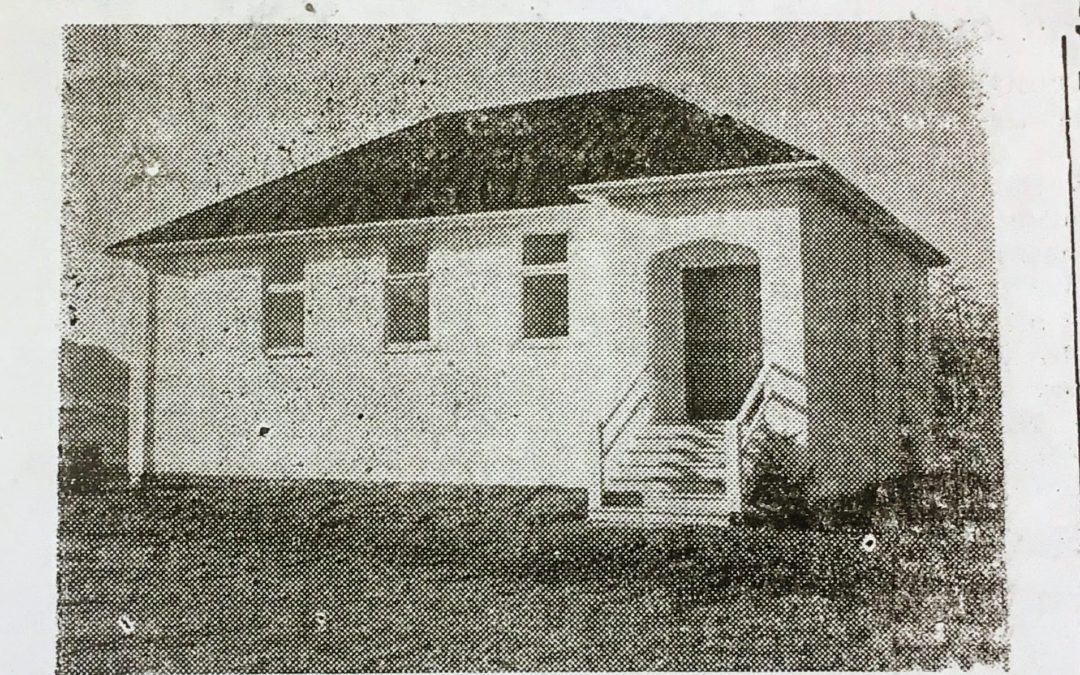 Originally built by the members of the Church of Christian Science in 1942, it was intended as a local community gathering place on main street in Downtown Courtenay.

The Exterior was pebble-dot stucco and was painted many many times over the years to protect it from the westcoast weather. The interior was lathe and plaster type walls and ceiling with full 12′ height. In recent years the lathe was needing to be patched to prevent cracking.

The structural support beams of old-growth Fir is solid and beautiful. The building inspector likened the beams to being so old it had become hardened to the point of petrified wood.

The flooring is end-grain fir with beautiful clear lines and no knots. Along with the baseboard, it has been saved to keep the historical connection and reuse materials preventing waste.

An addition was built onto the front of the old church in 1997 to become a “reading room” for the public to enjoy. It is 5 sided window-filled room built on the north end.

Derek had been looking for an expansion space for Fit Chiropractic & Sport Therapy for a long time. Just nothing really “fit” the ideal location and venue… until an afternoon in May 2018 when his wife told him to walk two blocks over to look at this building that a friend had told her was soon to be available by the Comox Valley Free Evangelical Church.

As soon as Derek walked in the door he had a gut feeling that this was EXACTLY the space that he was waiting for: a historical icon in the downtown core with enough room to expand (to 1350 sq ft). It was just going to involve some creative energy.

The challenge was to create a modern health and wellness clinic within the walls of a traditional worship space. Luckily, Derek’s younger brother, Karl, is a historical revitalization architect with experience in NYC, Vancouver and currently San Francisco. Karl also recently completed a wood-architectural specialization in Finland to add to his impressive resume.

Derek leaned heavily on Karl for design and to create a flow for the new clinical use for the space. Karl aimed to keep the historical perspective with trying to reuse much of the original wood and if not possible, then using materials that match the 1942 era.

Due to the poor shape of the exterior stucco and interior drywall along with the total lack of insulation (anywhere!), the project was going to be much, much bigger than just a few divider walls.

By proposing to change the entire exterior material the building project pulled a Development Permit application with the City. This was a three month process to comply with the City of Courtenay’s design plan. After an enjoyable process, the design was approved with Slate Grey Hardie siding along with keeping the pebble-dot stucco on the more recent addition on the front end, and using a feature fir wood door to accentuate the West Coast connection.

The building permit application was approved on Sept. 12th and construction officially started with demolition of interior AND exterior walls. Luckily, there was a solid layer of ship-lap that kept the weather out during the month of September until the exterior siding was put on.

The builder was Ben Higgins of BKH Consulting, who was a personal contact and had 20+ years of historical renovations experience including 200 year old houses in France. He was selected because of previous work he had done and also his connection to alternative medical clinics as he was getting his Traditional Chinese Medicine (TCM) Chi Gong practitioner certification concurrently. Other projects he has worked on is Milano’s Coffee in Comox and many other custom projects around the Comox Valley.

With the design from the Architect and Ben’s experience with renovations this was ready to roll. Except we needed the approval from the City of Courtenay to start… After many discussions and 17 (!) modifications to the plans, we were approved on Sept. 12th, 2018 to get cracking.

Many trades came and quoted on the project and Ben managed them with professionalism and British dry wit. He kept a tight ship the project was given a verbal “best managed project in Courtenay right now” by an (unnamed) WCB inspector.

The unknown part of the project was the structural support of the original doorway facing Fitzgerald Avenue. This corner had a prior problem with water leakage and wood rot. Most of the corner and flooring in the first room needed to be removed and re-build to prevent future problems. This was to convert the old entrance way into a rehab treatment room with large window.  We removed the stairs and put in proper stairs and railing under the current codes on accessibility because it’s 2018.

The other part of getting this finished with keeping in tradition of the original church was keeping many of the historical components of the building intact. The fir baseboards were saved and restored to be re-installed on finishing. The beautiful hardwood floor saved from many years under carpet was able to be saved and brought to new life. The window trim was not able to be salvaged as 75 years of leaky windows had done their damage.

The finishing feature was bringing together the fir of the front door, the hardwood floor and the fir trim with a full wall of end-grain fir in the new waiting room. A speciality millwork team was brought in to professionally finish the job and tie into the front desk.

An important feature of this building is the reduction in environmental impact with new high-efficiency heat pump technology, above code new insulation throughout, along with complete LED lights exterior and interior with a fantastic product from local company Lotus LED Lights. The treatment rooms fade from bright white to calm soft white a lower settings.

We opened on Jan. 2, 2019 in the new-old building. Stop by for a visit. We look forward to showing you the new treatment space (and helping you reduce injuries and keep you active!).